Martin Nachbar is one of the most prominent  representatives of the so-called conceptual dance highlighting not only its intellectual but even comic potential. His performance Urheben Aufheben is kind of a lecture about the series Affectos Humanos [1962] by Dore Hoyer, a German choreographer known as the last expressionist dance artist.

Nachbar is, however, not just concerned with a mere reconstruction of Affectos Humanos, or archivisation or even revocation. He plays with the material and turns it into his own. His preoccupation with the original series provides him with so much inspiration, that, in the end, his own material predominates. So he becomes archivist and visionary rolled into one. The piece constantly examines the contradictions between the known and the unknown, between past, present and future, and conveys these reflections to the audience. The question of copyright, and what exactly is being revoked, can only be answered personally by every individual. Just as Nachbar's interpretation of Affectos Humanos remains truly individual.

“The title Urheben Aufheben [wordplay: German heben = to lift; Urheber = author, copyright holder; Aufheben = to pick up, to store or keep, to nullify] could mean three different things: first, something that was once created is picked up from the depths of history; second, something once picked up in the past is then stored or kept; and finally Urheben Aufheben could mean that the idea of authorship is suspended or eliminated completely.” - Martin Nachbar.

The performance has been realized with the support of the Départs network. Départs is funded by the European Commission (Culture Programme). 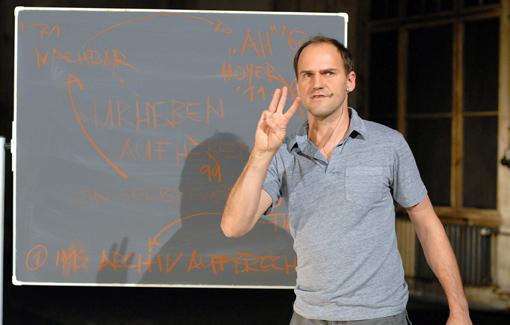