In Biofiction, by Simone Aughterlony and Hahn Rowe, things, materials, performers and sounds form partnerships, enhance and influence each other, and come together on the stage. Biofiction's polyamorous love story is a web of emotional reactions and intimate, luxurious, sensuous and sexual cohabitations.

The bodies of Biofiction touch, vibrate, excite, and resonate  with the terrain around them, which encompasses both human and non-human elements, both the natural and the artificial. The bodies influence it through their exertion while simultaneously surrendering to its various sensations, qualities and life-affirming power. Biofiction's desert of non-hierarchic power relationships is utopian, yet present here and now. Its choreography is the rebuilding of a world.

Hahn Rowe builds the soundscape of Biofiction live, using both electronic instruments as well as working the materials intimately, simultaneously provoking their auditory qualities and following them.

"Biofiction is a rare love story between many, an unexpected clearing on a wilderness that offers a close-up on human and non-human assemblages and their affects. Situated within an inquiry into vibrant matter, a choreographic poem emerges that is both careful and utterly libidinal.

Gathering the remains of the previous two works in The Biofiction Trilogy, the hot pink flesh placeholder, wood and crafting tools, the rope that weaves, the natural and artificial entanglement of fluids and materials – Biofiction creates a new horizontal terrain that renders a plurality of agencies without ontological hierarchy. What may ordinarily be considered inadequate stimuli is now attended to for all its sensual and specific qualities, cultivating an irrational love of matter. The intimate rapport, the dance that spectrums acts of labour, pleasure, cohabitation and simply ‘being with’ refuses the normative divisions between nature and culture, male and female or any such binary.

A practice of reorienting and redistributing the senses generates a queer consciousness and affirms a landscape that is both present and utopian. We see stereotypes and prototypes, we recognise then delight in mis-recognition, we may even laugh despite ourselves. Understanding «Biofiction» in terms of a narrative of sexuality that does not yet exist sustains curiosity - defying conventions or identification renders this choreographic work as a continuous world- building practice.

Is this movement research, music or fun post-porn practice? Beyond the associations, it brings the bodies and companion materials in conversation to know no difference between being excited, being exciting and being excited-with."

Simone Aughterlony (CH/DE) is an independent artist based and supported in Zurich and Berlin, working predominantly in dance and performance contexts.

Supported by the NATIONALES PERFORMANCE NETZ (NPN) Coproduction Fund for Dance, which is funded by the Federal Government Commissioner for Culture and the Media on the basis of a decision by the German Bundestag; Stadt Zürich Kultur, Kanton Zürich Fachstelle Kultur, Swiss Arts Council Pro Helvetia 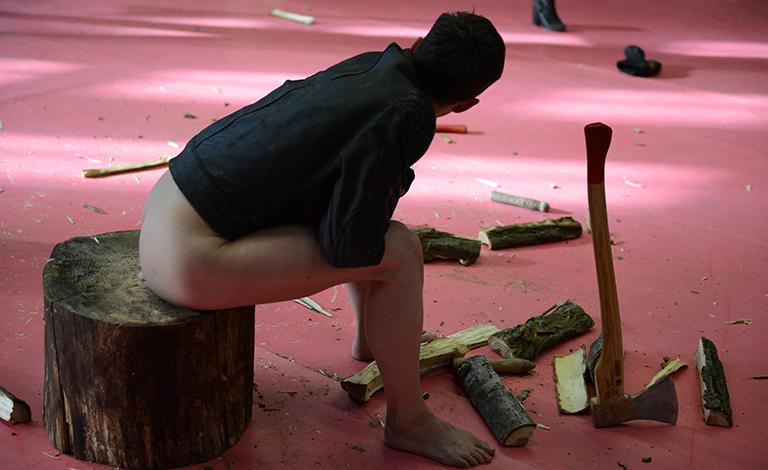