Living is a form of movement – from seaweed to birds, from trees to snakes, and from bacteria to human beings.

In Veli Lehtovaara’s new work Conversations, three dancers converse through movement and words with other forms of nature, their contemporaries, their ancestors, each other, and the audience. The register of the group conversation oscillates between what’s spoken and moved, what’s logical and poetic, what’s philosophical and practical, and what’s imaginary and actual.

This is a dance of gradual transformation. The passage of steps and thoughts unfolds in circles and waves. It is a performance of letting go of that which will not stay without a holding. Falling, drifting, floating, and flying, singing within and dancing without, breathing and walking together, it is a conversation with three distinct voices that entangle as they form circular paths in time. A dance where words become what they once were - trees, stars, and substance of primeval environment - writing turns back to traces of movement.

The choreography incorporates forms from the natural development and evolution of things, cyclical change, and the ebb and flow of objects or events from different environments and living systems. Breathing, seeing, walking, and conversing are the basic materials for the choreography, and human complexity is countered by this simplicity. Efficiency, delicacy, and nuance are the distinguishing qualities of this dance.

How does the passage of energy and information appear as thoughts between transforming and transformed bodies in a dance? What is waiting in thinking while dancing? How can we see dancing as the movement of nature and choreography as a natural phenomenon?

The performance combines choreographic, ecological, philosophical and visual forms of thinking. It gives attention to what unites human beings with other living beings in different stages and scales of life especially from the perspective of corporeality, perception and movement.  Becoming a member of choreography is an event of belonging.

The visual scenography of the performance is created by Eija-Liisa Ahtila. The moving images pursue to create signs of a presence of a place and suggest a region for the dance to take place in. The location is a clearing of a field and a narrow country road that runs across it. The images bring attention on the events and time indicated by this region - wind, birds, change of light, the arrival of the mist - the falling of the night.

The work is inspired by a text of Martin Heidegger’s written in 1944-45: A Triadic Conversation on a Country Path between a Scientist, a Scholar and a Guide. The text is a philosophical and poetic contemplation on the relation between human beings, nature, and technology.

The performance takes place in the frame of the project [DNA] Departures and Arrivals which is co-funded by the Creative Europe Programme of the EU. 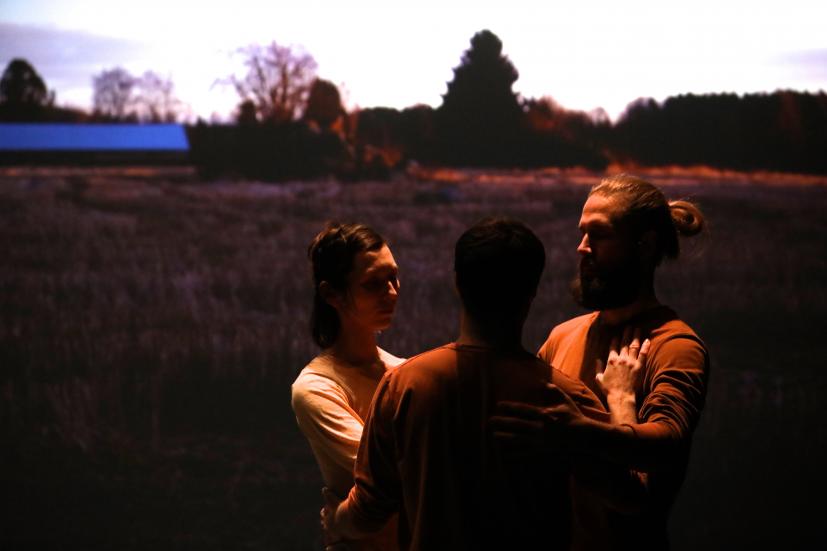