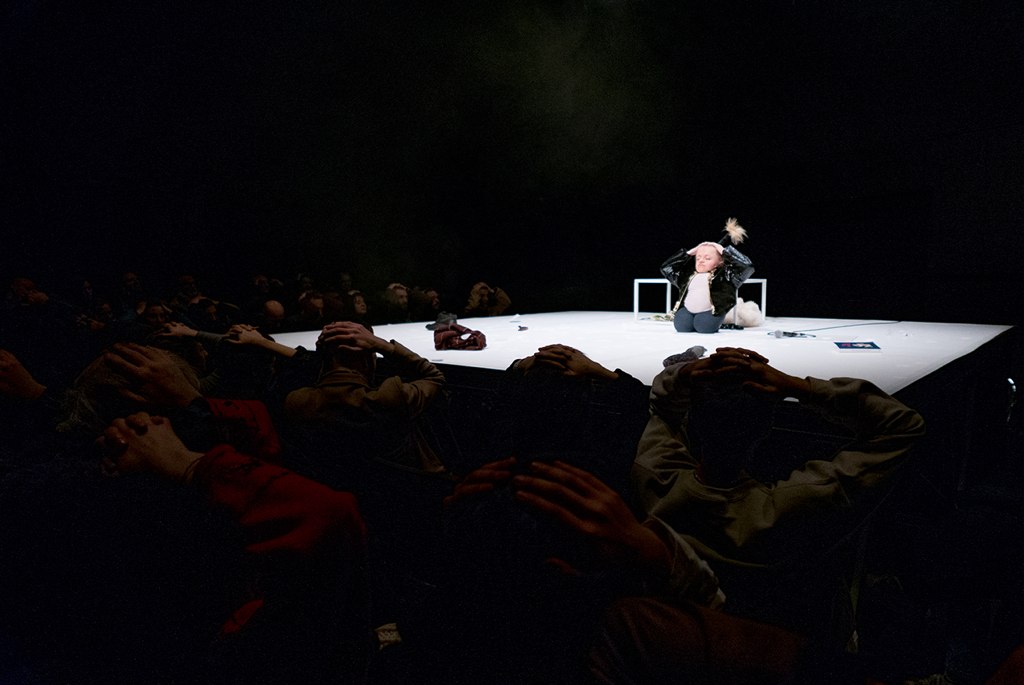 "I think over the years we managed to make a piece that radiates above us, that in some moments goes further than our personal agencies. We have been fortunate to perform AJIMA regularly over four years now in different countries and contexts, which definately made the piece stronger.

In AJIMA we play with social projections that everyone casts on each other all the time. You don't talk much, so maybe you are arrogant. Or shy. You wear high heels, so you are extra feminine. You are in a wheelchair, so it's really great that you can dance in a night club.

Especially Western societies are built on marginalisation and "othering" of what is not the majority, the norm (which is not as rigidly carved in concrete as we sometimes think). We have to understand that norms are fluid and treat them as such. If women were not allowed to vote some decades ago, now we struggle to welcome transgender, black, disabled, arabic... people in the middle of western societies. And I don't mean integration, I mean meeting the other on the same level.

This is what we try in AJIMA, playing with the levels, metaphorically and physically in the theatre space. Social interaction is constant negotiation, but we don't all get to start with the same privileges or equivalent opportunities. If we want this to happen, the ones with more power have to give up some of that power. Inclusion is a top down concept, but what we actually need is sharing and work work work as individuals on your own racism, your own discriminative behaviour, your own privileges, because you inherit so much of it just by beeing born into society.

AJIMA also works with personal objects, things that we put meaning into or that mean a lot to us, in fact the amount of objects we think we need to enjoy everyday life has increased dramatically over the last century and we don't think much about what that does to us as social beings. Maija has developed a technique to read people's charecteristics from objects and even tell a bit about the future, so AJIMA is also a joyous welcoming of other times and new thinking that is already there, deeply routed in ourselves.

Performing this piece through different stages in life has also shown us how differently you can approach the same material and how you can find and loose yourself in a work again and again, strengthening the level of trust and friendship in the team. As much as AJIMA is a very personal solo performance, it is a community piece, from and for all of us."