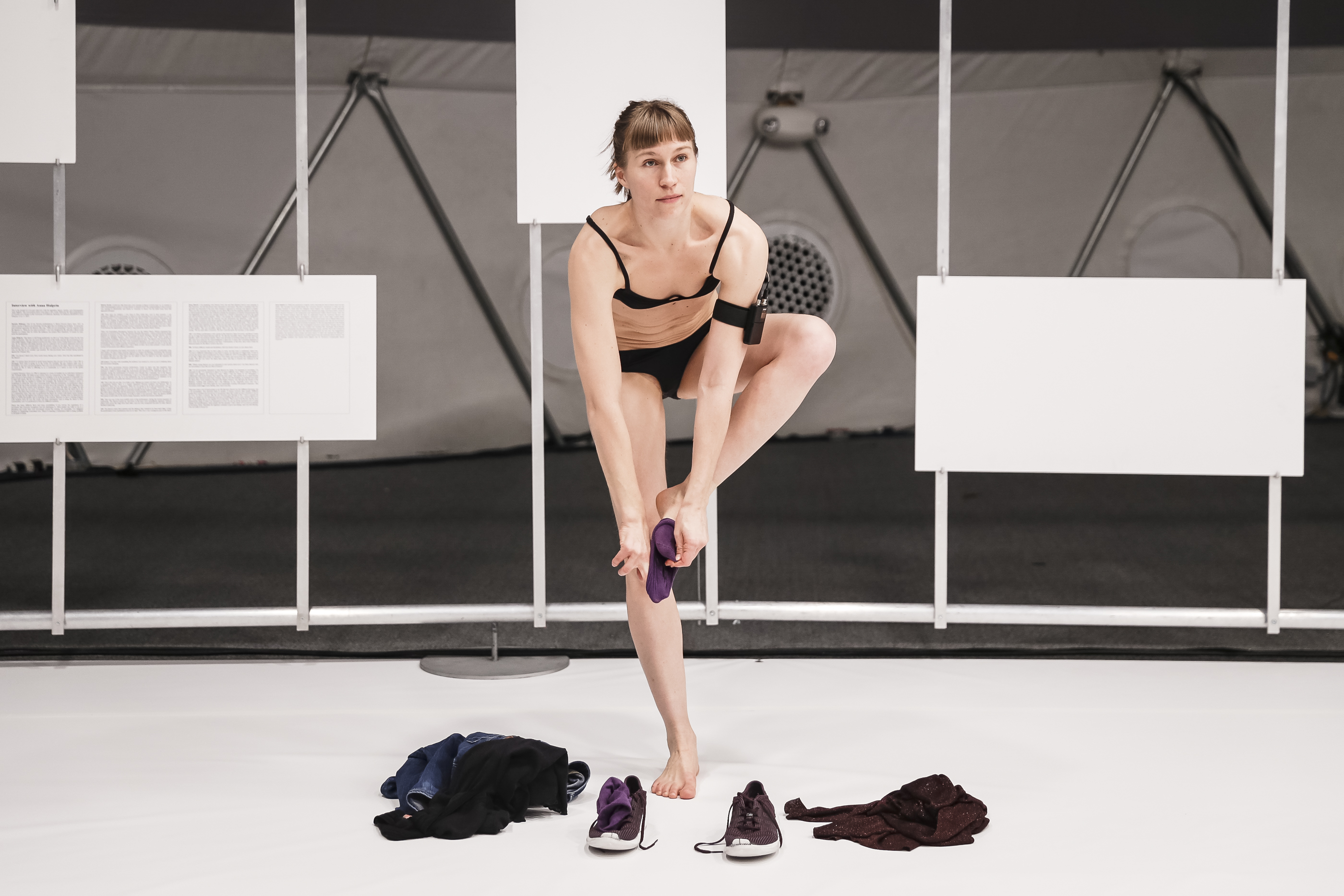 - What led you (in your body of work until then, in your thought process) to begin the series The Red Pieces, to approach the unresolved issues of nudity and sexuality. Was it a more personal question at some stage?

In 2013, when I started working on The Red Pieces, I realized that a lot of societal structures regarding sexuality were actually bound up with fixed ideas about family structures, children and notions of stability, issues I did not feel comfortable with in my own nomadic life. At the time I was also pregnant with my first child and you could say it was a personal quest to better understand the structures that define the relation between sexuality and the sociopolitical field. But actually, I experienced it more as a curiosity towards the history of sexuality in general, and more specifically towards the history of sexual performance. My aim was to attempt to locate where we are at today by investigating the past and I started researching the sexual liberation movement of the 1960’s. I was definitely also motivated by a desire to invent new practices for how to think about the body; its sexual and intimate potentials and how these could influence and effect power structures in society at large.

- How have you processed and prepared yourself to navigate the space in the solo pieces, managing the intimacy with the audience while keeping such an impressive authority, performing sexual gestures and feeling comfortable with all that?

In the solo pieces I was busy thinking about how to place the naked body in close proximity to the spectators without having to aggress or shock them, which didn’t interest me as a starting point for working with sexuality. I developed a concept that I have named “soft choreography” which has to do with how to think about the presence of the audience - their bodies, affects, ways of positioning themselves in the room - and how these elements would be part constructing the performance (especially 69 positions). At the same time I felt I needed to have a clear script that would allow me to navigate through the performances and to feel safe doing them, so the text and movements are really quite fixed in spite of searching for softness in the performer-audience relation.

- There are also two group pieces that we unfortunately don't see at Side Step. What was the motivation between solo/large groups division and how was the process of navigating the intimacy of the actions different or similar?

I used the solo works to do long term research on topics I was also interested in exploring with a group. What you can do alone is very different from what you can practice (erotically/sensually) in a group, and I felt the need to both experiment with my own body, the presence of bodies of the spectators as well as proposing to other performers to explore these questions collectively. I think all the works actually question sexuality and its relationship to the public sphere and to how public and private spaces are no longer clearly separated, it is just that the collective is more explicitly represented on stage in the group works whereas in the solos the audience members are more implicated in the choreographic structures.

- What is currently moving you as an artist, as a human being?

After having worked on The Red Pieces my questions around sexuality, gender and equality have moved to a different register in the arts field. I am partaking in collective discussion within the Belgium community with other artists and arts organisations to think about how to improve the working ethics and the regulations that influence what happens during creation processes in dance and performance. I am also thinking about how equality is something that needs to be implemented on a structural and political level and searching for how I can contribute to that.

In my artist practice I am currently making two new works that open up a new strand of research. They have to do with thinking about the relationship between abstraction and how new technologies influence our bodies in ways that are not easy to detect, nor concretely mapped out yet. Still very busy figuring out what this new direction can bring!